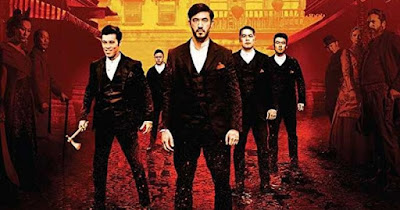 Remember Banshee? Remember how badass that show was? It had everything men liked in a in TV show and it was definitely not Star Wars, Star Trek or Disney Marvel bullshit. Like Stalkeye used to say : “Banshee is boobs, babes and fisticuffs.” Yes, Banshee ended on a sour note, because they shrunk Banshee from 5 seasons to 4 seasons. Season 4 does not exist in this dojo. Jonathan Tropper, the showrunner, dropped the ball with season 4 big time. But….. I dare you to say that Banshee seasons 1-3 are not some of the best TV show seasons you will ever see!

This brings me to the new show for men. The show is called Warrior. It is on Cinemax and Jonathan Tropper is the showrunner again. It is not his idea, though. Many years ago Bruce Lee wanted to star in his own shouw about a Chinese immigrant with martial arts skills in the 1870s San Francisco Tong Wars.Lee didn’t get that show, but a year later there was Kung Fu all of a sudden. Bruce Lee’s idea was stolen and given to David Carradine. David Carradine couldn’t kick a dent in a package of butter and he was supposed to be this kung fu master? Fucking Hollywood.

The good news is that Bruce’s Lee’s script for his show is the baseline for Cinemax’s Warrior. Shannon Lee, bless her soul, is an executive producer on the show and I hope she gets a role in the show as well. It would only be fitting to her in the show. I am keeping my fingers crossed for that, because Shannon Lee deserves better.

The most important fact, though, is that Warrior is a badass show. The main thread of the show is that the Chinese immigrant Ah Sahm is trying to find his sister who disappeared. There is a big tension in San Francisco between the Chinese inhabitants and the Irish inhabitants. It’s a powderkeg that is about to blow up. Ah Sahm ends up being sold to a Tong gang, but it is all part of his plan to find his sister. When he finds her he is not happy to see what is going on and wants to do everything to get her back.

Andrew Koji, who plays Ah Sahm, is a fantastic find. He doesn’t look like a pussy lotion boy and he can kick ass. In fact, you can easily add him to the list of great martial arts actors right away. He is in good company with Jackie Chan, Jet Li, Iko Uwais, Tony Jaa, Marko Zaror, Mark Dacascos, Tiger Chen, Michael Jai White, Joe Taslim and Scott Adkins. He is that good.

Banshee alumni Hoon Lee, the man who turned the word motherfucker into an artform, has a great role too.

I never heard of Jason Tobin, but the he cracks me up. He is playing Ah Sahm’s sidekick Young Jun.

Joe Taslim, what do you know, is also in the show. He is one of the bad guys and sooner or later I predict he will run into Ah Sahm and there will be some serious ass kicking.

Here is hoping that Banshee alumni Anthony Starr makes an appearance in Warrior too.

Warrior got a second season already and that is no surprise. You could say Warrior is a cross between Gangs Of New York, kung fu movies and westerns and is must-see TV. It is the best new show of the year. It has great fight scenes, real humor, suspense and just plain entertainment. It is not a show for pussies.

Even if they would quit Warrior after 2 seasons, which I doubt, it will not be a problem. Andrew Koji is here to stay and I am looking forward to what he will do next.