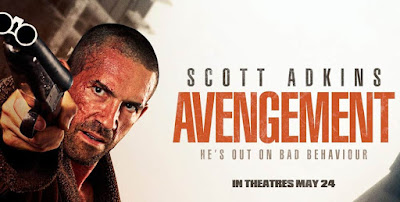 If you are an action movie fan like myself you know who Scott Adkins is. The man needs no introduction. This English bloke is building an impressive list of martial arts movies. Granted, not all of those movies are instant classics, but some of them definitely are. When Scott Adkins makes a movie I am there.

When I saw the title Avengement I first thought it was an Avengers rip-off, because there is still this trend of making a low budget version of “successful” Hollywood. But when I saw the name of Scott Adkins I was glad it was not an Avengers ripoff.

Avengement is a hard-hitting movie. Scott Adkins plays a bloke who ends up in prison. What he doesn’t know is that his brother wants him dead. Scott Adkins is a way too nice guy to be in prison and gets a crash course in prison life. Everybody wants his head so he gets attacked a lot and has to fight for his life. You think the fights are fair? Hell, no. It’s jackal style and Adkins gets triple-teamed, quadruple-teamed and etc-teamed.  No fair odds at all. When he finally finds out why everybody wants him dead he starts training like a madman to get revenge against his brother. Will he get revenge? I am not gonna say.

One thing is for sure. Avengement is the most violent movie Scott Adkins ever made. This movie makes Out For Justice look like a pussy movie. In fact, this movie even gives The Night Comes For Us a run for its money. Add to it, that it is really a British style kind of movie, and you get a gritty, violent movie. One cannot imagine the pain Scott Adkins’ character goes through in this movie. He has nothing to live for, but revenge. He is also not invulnerable. He suffers a lot of pain, because his enemies don’t play fair at all. And the prison is insane. What a lot of scum there is. This might be the most vicious prison movie ever filmed. The only prison that comes close is the one in the Cambodian martial arts movie Jailbreak (shame on you if you didn’t see Jailbreak).

All in all Scott Adkins has another classic on his CV. Here is to lots more Scott Adkins movies.
The guy deserves the best, because he always works hard.