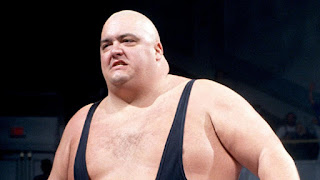 Life struck with death again. First Keith from The Prodigy committed suicide. Then Luke Perry also died, but to me the most shocking of them all is King Bong Bundy

A good hero needs a good villain. King Kong Bundy was that villain. WWE, then WWF, in the 80s was awesome. You had such a collection of fantastic characters that it made up for great television. King Kong Bundy was one of the characters, who really stood out during that time. He was fat, he was bald and he was mean. He was 6 foot 4 (1.93 meters) and weighed 450 American pounds (204 kg). And he had no trouble squashing people with his fat body. Next to that he also looked very pale which made for an awesome look. And you hated him when he beat up poor wrestlers and then demanded the ref to give the 5-count instead of a 3-count. What an arrogant bastard he was.

His most famous match is the Wrestle Mania 2 cage match against Hulk Hogan. The way it looked Hogan finally met the opponent he could not beat. It made up for a great historic match.

People will also remember him for squashing midget wrestlers Little Beaver at Wrestle Mania. Truth to be told, Little Beaver had it coming. It created an awesome image seeing that behemoth squashing that little guy.

One great story was that Bundy took a flight with Bobby Heenan once. Bundy was sitting next to Heenan and was sleeping. The stewardess came to Bobby and asked what Bobby wanted to eat. Then she asked Bobby what King Kong Bundy would like to eat. Bobby said a pail of fish. What Bobby didn’t know was that Bundy heard that. So the next thing Bundy did was turn over and lay on Bobby Heenan for the rest of the flight and kept sleeping. Bobby Heenan had nowhere to go.

King Kong Bundy also made it onto Married With Children, one of the best TV comedies of all time. It was a no-brainer that he would be some kind of family to the Al Bundy and company. And, also, he had a small role in the fantastic Richard Pryor movie Moving.

King Kong Bundy was only 61 years old. R.I.P. and thank you for all the wonderful entertainment, master of the 5-count.