She's fierce! She's beautiful and if you cross her, she'll cream ya!

In honor of Women’s History Month, I’m giving a shout out to one of the first, if not the first Badass Action heroine of Cinema- the Godmother of Blaxploitation films herself, the insatiable Pam Grier!

When you ask a pop culture enthusiast about Blaxploitation films, one if the first movies that cone to mind besides Superfly and Shaft is either Foxy Brown or Coffy. Both were legendary performances courtesy of Ms. Grier as both protagonists faced down the odds only to prevail and deliver justice by sticking it to the "Man" in the end. Rotten Tomatoes listed her as the second greatest female action hero in cinema history. Writer, Producer and Director Quentin Tarantino who revitalized her career with Jackie Brown referred to her as possibly the first female action star!

Grier started out as a receptionist at AIP (American International Pictures) back in 1967 and was discovered by director Jack Hill who decided to cast her in grindhouse prison films starting with The Big Dollhouse. However, her breakthrough was Coffy (1973), also directed by Hill, in which she plays a nurse who seeks revenge on drug dealers and a mob boss after her younger sister became hooked on drugs. (Coffy, along with 1973’s Gordon’s War preceded vigilante concepts within Pop Culture like Death Wish, Taxi Driver and Marvel Comics’ The Punisher.)
Although the dialogue and acting can be hokey at times, there was an interesting exchange between Coffy and her Police Officer friend when expressing her feelings about vigilantism.

It’s not all too heavy handed when there’s a slight balance of comical breaks, as in "catfights"!

The film’s momentum picks up a gradual pace but there’s a real gut punch as Coffy’s trail of vengeance leads to a shocking discovery of who is behind the Drug cartel.The film's tagline in advertising was "They call her 'Coffy' and she'll cream you!" As a result, Coffy became a box-office hit, thus Grier was noted as the first African-American female to headline an action film, since protagonists of previous "Blaxploitation" films consisted of males for the most part.


Following the success of Coffy, Grier had gone on to do more Blaxploitation films, most notably was Foxy Brown, in which she again seeks revenge after her government-agent boyfriend is killed by members of a drug and white slavery syndicate. She links her boyfriend's murderers to a "Modeling agency" run by Steve Elias and Miss Katherine. Foxy decides to pose as a prostitute to infiltrate the Prostitution ring which leads her on a tour de force of revenge-themed scenarios from cremating sex slave pimps to castrating a foe and presenting his severed dick to his Madam girlfriend. (The ol pickle in a jar trick.)

Ironically, Foxy Brown was originally intended to be a sequel to Coffy, and the working title of the film was Burn, Coffy, Burn! However, American-International Pictures decided at the last minute –that they did not want to do a sequel, even though Coffy was a huge success at the box office.

Foxy Brown was a moderate commercial success and is one of the most influential Blaxploitation films. Pam Grier's character is the female archetype of the genre, and film historians note that it is one of the first Blaxploitation films to portray a strong and independent woman. Until Pam Grier, women often existed exclusively to support their men for a small part of the film. Foxy Brown and Coffy are also unique for their portrayals of drug pushers and pimps as villains. Before these films, the Blaxploitation genre often romanticized such individuals like Superfly and The Mack.

Like most trends, Blaxploitation came and went. However, after two decades, there began a resurgence of Grier's career. 1997's Escape from LA, the anticipated sequel to my favorite movie Escape from New York, featured Grier as “Hershe”, the transsexual leader of a gang called Saigon Shadow. Um, yeah.

Soon after the disastrous EFNY sequel, came Jackie Brown a seminal love letter to the Blaxploitation genre for which Pam's career is mostly known for Directed by Quentin Tarantino, this movie starred Grier as the titular protagonist who is involved in money smuggling for a black-market arms dealer played by you guessed it, QT’s favorite Brotha, Samuel L. Jackson. The film garnered praise from critics and moviegoers alike and Pam was nominated for several awards including a Golden Globe.


Sometime afterwards, she reunited with John Carpenter for the Sci-Fi horror film- Ghosts of Mars as Commander Helena Braddock. However, her appearance was very brief but, in the end, it didn’t matter as the film was  disappointing to say in the least. 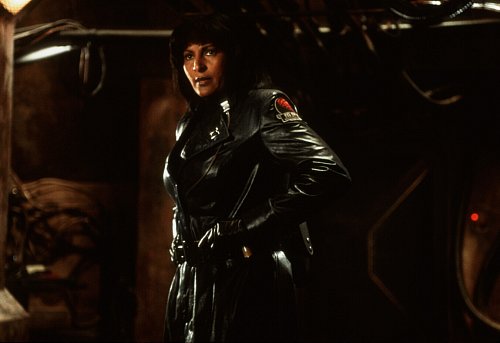 Despite her roles in not too recent box office bombs, Grier has maintained steady work from The L Word, guest appearances on Smallville as Amanda Waller, and Law and Order In other words, Grier was still very relevant and still getting paid. She recently co-starred in Rza’s Man with the Iron Fists. (One of these days, I’ll muster the courage to watch the rest of that movie. *Shudders*) Anyway, here’s to Grier! Not only was she a sex symbol, but a pioneering actress who has paved the way for many female action heroes/anti-heroes in cinema history!

You can check out some of Pam Grier’s Blaxploitation era available on Amazon Prime Video.