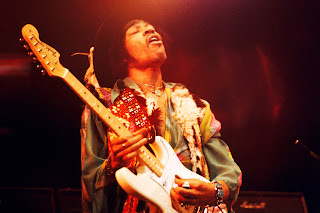 Since I live from day to day, days are busy days and often I don’t even know what date it is or care about the date. I did find out it was Black History Month thanks to Stalks’ article.
So here are my 2 cents.

Looking up important black people in history Martin Luther King, Ruby Bridges, Mohammed Ali and Jimi Hendrix come to mind. All the people who call Europeans Eurotrash are AmericUnts to me. Yes, you read it right! Why, because AmericUnts like to point fingers at Europeans while they killed off Martin Luther King. They protested big time when Ruby Bridges wanted to join a white school. They punished Muhammad Ali, because he didn’t want to go to Vietnam. And how about equal rights for black people. Why did they get that only in the 60s and not decades before?

And yes, Holland has black Pete and white master Santa and that is very wrong, but at least black people over here aren’t thrown in jail for smoking a joint or shot under the false pretense of being threatened. Now that I have that off my chest let’s get to black people in cinema. After Stalkeye’s wonderful article on Black Horror, I had to write about black actors and actresses who entertained me and left a great impression on me.

Who can forget Julius J. Carry III playing Sho Nuff in The Last Dragon? What an iconic role that was. Anyone who saw The Last Dragon knows who Sho Nuff is. And probably nearly anyone can quote him with various quotes.

Who can forget Mr T playing B.A. Baracus in The A-Team? Legendary. The MVP of The A-Team by far. I still quote the man. A lot of “Shut up, fool!” has been thrown at fools lots of times.

Yaphet Kotto was also an underrated actor. He was fantastic as the bad guy in Live And Let Die. He was even more fantastic in Midnight Run. Alonzo Mosely FBI, motherfuckers. I don’t know if he made a lot of comedies but if he did please recommend some. I am sure he killed it. 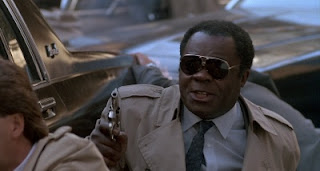 Well, do I even need to say more? Lethal Weapon would have sucked had Danny Glover not been in it. He added the badassness that the movie needed. And it was nice to see him and his family not playing a Bill Cosby rip off or some other clichés you often see in other movies. And not only that, Roger Murtaugh was none of the stereotypical negro categories that Hollywood puts black people in.

Sometimes I do wonder if Richard Pryor does not get enough respect. He was a great stand-up comedian. His team-up movies with Gene Wilder were highly entertaining. I didn’t see many of his solo movies, but choosing between Brewster’s Millions, The Toy and Moving, Moving was absolutely his best solo movie!

When I saw Eddie Murphy’s Beverly Hills Cop for the first time, my mind was blown. I had never seen a character like him before. He was totally something new. I loved his early stuff, but later on he dropped the ball and that is not the only thing he dropped. Such a shame. Beverly Hills Cop 1 and the 2 48 Hours movies are watchable repeatedly.

Chris Tucker is the funniest black actor around. Maybe even the funniest guy on the planet. Next to that he has some acting chops, but Hollywood doesn’t make much use of them. They always want him to be the funny man. But since he is wise and picks his movies Hollywood can’t devour him and that’s a good thing. The other side of the coin is that they try to find imitations and fail miserably. I can’t wait for Tucker to make his glorious return.

Pam Grier is the goddess of Blaxploitation. A pioneer if there ever was one. However, Hollywood disrespects her very much. Why the fuck does a fine woman like Grier get roles to play the opposite sex? WTF? What is Hollywood’s frequently casting  her as either a Lesbian or Transexual?.
Pam Grier deserves better. I would love to see her do good movies. She is already iconic, but some other iconic roles would be good too.

Aaliyah is worth 5 Beyonces and 10 Rihanna and a googol Kardashians. She is such a tragic figure. We will never know what direction she would go had she lived. I am at least glad she did Romeo Must Die with Jet Li and although Queen of The Damned was not a good movie she was one of the best vampires ever on-screen. Aaliyah had it all only for it to be taken away from her at such a young age. I still find the circumstances of her death very fishy.

Never touch Keith David’s fries and neither mine. Fries are serious business. There is something so funny and cool about Keith David, that I can’t place it. The guy is just funny.
And he has very good movies on his resume with Men At Work being my favorite. They Live, Clockers and Dead Presidents I thoroughly enjoyed.

Name me a movie that has a better intro than the first Blade. Please name one. Wesley Snipes is badass. Marvel and Disney should be grateful he put Marvel movies on the map. But instead he gets shit as thanks. Of course, Snipes is Blade, but he was some very cool movies on his resume as well. He was hilarious in Major League. He was obnoxious and hilarious in White Men Can’t Jump. He was badass in New Jack City. He was cool in Money Train. And I loved Rising Sun.

Mr Luther himself. I still must catch up to The Wire and I never get the chance to, because The Wire definitely needs super focus to follow the story. Idris Elba has a coolness that I can’t explain. Therefore, it is utter ridiculous that they still didn’t make him a James Bond. And you know why? Because Hollywood has no balls.