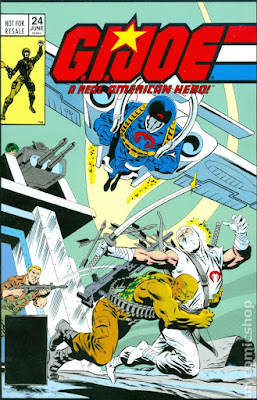 Originally published from the now defunct site, Pulp Epic during its 30th Anniversary (February 2014) and now unearthed, rewritten and edited from the ground up and just in time for its 35th anniversary, let's take another RETROspective into Marvel Comics' G.i.joe A Real American Hero Issue #24 titled, The Commander Escapes!

"Is there a prison big enough, strong enough to hold" the most ruthless terrorist determined to rule the world?

Well according to Joe scribe, Larry Hama and special guest illustrator Russ Heath, let's find out!
After the events from Issue #23, The Cobra Commander has been detained by the Joes within the plateau of the Rocky Mountains. The Commander, in full bravado disregards how long Duke and the Joes can contain him without any supplies or shelter until he notices the arrival of a C-130 cargo plane, unloading   large crates and while some are marked as parts for a pre-fabricated fortress, the other crate remains a mystery as it is left unmarked.

Duke reassures Cobra Commander's skepticism is in vain, after the fortress has been assembled and, in the meantime, at Cobra's Headquarters, Destro is surprisingly shocked at the arrival of two unexpected “guests"; Major Bludd and the Baroness!

Destro deduces that if they are to take control of Cobra, both the Commander and the unquestionably loyal Storm Shadow must be eliminated. Bludd mentions how he had planted a homing beacon on Storm Shadow's sword handle, while the Baroness then dispatches Cobra pilot Wild Weasel and saboteur Firefly to assassinate the Ninja on sight.

However, Storm Shadow is enroute to rescue the Commander, using Cobra spy satellites to locate his whereabouts within the park range of the Colorado Rockies and at the pre-fabricated fortress, Cobra Commander mentions to Duke, how one of his helmet's features has a lining of plastic explosive should they attempt to “pry it off his cold, dead head”! But unbeknownst to the Joes, there is also a short-range radio receiver built into the helmet which keeps him in contact with Storm Shadow.

The Commander convinces the Joes take him outside for some "fresh air." When they comply, they are ambushed by Storm Shadow via C.L.A.W. (A Cobra Jetpack apparatus). He carries the Commander away, but the CLAW is damaged by Roadblock's 50 Cal Browning LMG. With limited fuel left to carry one person back to the Cobra cargo plane, Storm Shadow is left to fend for himself.

Duke opens an unmarked crate that reveals a V.T.O.L. craft- Sky Hawk, and without hesitation, jettisons off in pursuit of the C.L.A.W.  To secure the Terrorist leaders escape, Storm Shadow hands over the aerial apparatus to the Commander while serving as an obstacle for the pursuing Joes. 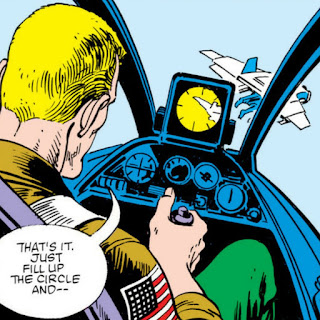 Gung-Ho and Roadblock attempt to stop the ninja from taking down Duke’s craft, the Cajun Marine is slashed by the Ninja's Katana. Roadblock then tackles and pummels Storm Shadow.
Two F.A.N.G. helicopters emerge from the Cobra cargo plane flying overhead. They are easily taken out by the Sky Hawk’s missiles. But it is too late as the C.L.A.W. makes its way inside the cargo plane, and to complicate things further, Duke's Sky Hawk does not have enough ammo to shoot it down!

Despite Duke’s failure to recapture CC, all is not lost, as the Joe team discovers a mailing receipt from Storm Shadow's pocket addressed to Chokoloskee, Florida perhaps seeing this as an opportunity for investigation.

While in the meantime, Cobra operatives Wild Weasel and Firefly have followed Storm Shadow's homing beacon to the everglades in Chokoloskee, Florida mailed specifically to what is the lair of Zartan: Master of disguise and Leader of The Dreadnoks!

The Commander Escapes is one of my favorite issues from the popular G.I. Joe comics published by Marvel and here are the reasons why:

Well for starters, Larry Hama provides a simple yet effective adventure narrative which can be compared to a few classic action films of the seventies and then there’s Russ Health’s amazing artwork to compliment that vintage aesthetic. Heath had an illustrious career as an artist ranging from War Comics, Playboy and of course, the model artist for G.I.Joe’s animated series and commercials! Truly a legend! The debut of the Sky Hawk, as well as the introduction of new characters from Cobra’s toyline, marks an exciting tentpole when establishing Cobra’s very own "Legion of Doom" starting with a roster that consists of Firefly, Scrap Iron, Wild Weasel, a leather clad Baroness and perhaps the strangest adversary within the G.I. Joe universe; Zartan! 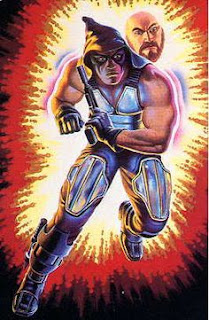 This era was a very exciting time for fans of the toys, comic and the following animated series and I for one, am grateful for the experience! In memory of Russ Heath (1926-2018)

And now, for a lesson in marketing!
G.I.Joe #1 Operation Doomsday!

Back in April 1982, Hasbro aired a 30 second animated commercial to promote the rebooted toyline as well as the Marvel comic. The animation chores were brilliantly handled by Japanese studio Toei which showcased an elite Anti-Terrorist Strike Force as they prepare to rescue a nuclear physicist before Cobra can acquire her secrets. (See Operation Lady Doomsday)

Despite clocking in at say, 30 seconds, there was plenty of cool scenes I gathered from the spot; from a futuristic underground base of operations (The Pit) to the debut of the Joe’s stoic Commander; Hawk.

And of course, there’s that iconic theme song courtesy of Spencer Michlin and Ford Kindler that became used sometime afterwards for a more ambitious project!

The comic commercial ended on a cliff hanger as Hawk via Jetpack pursues an escaping Cobra Agent to rescue the kidnapped scientist. Of course, this was deliberately done, as a means of getting the viewer to purchase both the comic and of course, the toyline! As Hasbro's former VP Kirk Bozigian would often say, "diabolical"!

this impressed Kid, rushed out the House, bought the damn book and the action figures, starting with Stalker and Snake Eyes because they were the coolest looking among the 8 figures! Stalker being a brotha didn't hurt none.

“Can the Joes save her in time? Find out in Marvel Comics!” was the often-used narration, provided by Jackson Beck for that dramatic effect.

The succeeding commercials worked so well, that Ad agency Griffin Bacal, Sunbow and Marvel productions developed a 5-part miniseries chronicling the further adventures of
Some often-critiqued toy-based cartoons as 30-minute product placements. Well, it only took a 30 second spot that convinced me and thousands elsewhere to “Collect them all”! G.I. Joe was the very first Comic to have its own commercial and a very impressive marketing tie in at that!
Now you know and knowing is half the battle!