In the sarcastic tone of "I never saw this coming" news, According to Deadline, Netflix has made it official that both Marvel based series the Punisher and Jessica Jones have been axed from the steaming service. “Marvel’s The Punisher will not return for a third season on Netflix,” Netflix confirmed to Deadline. “Showrunner Steve Lightfoot, the terrific crew, and exceptional cast including star Jon Bernthal, delivered an acclaimed and compelling series for fans, and we are proud to showcase their work on Netflix for years to come,” Netflix also confirmed;

“In addition, in reviewing our Marvel programming, we have decided that the upcoming third season will also be the final season for Marvel’s Jessica Jones,” “We are grateful to showrunner Melissa Rosenberg, star Krysten Ritter and the entire cast and crew, for three incredible seasons of this groundbreaking series, which was recognized by the Peabody Awards among many others”.
“We are grateful to Marvel for five years of our fruitful partnership and thank the passionate fans who have followed these series from the beginning.”

While Daredevil’s success had set the tentpole for Marvel Television series since 2013, other shows like Iron Fist and The Defenders didn’t not garner enough critical praise. Personally, I never cared for Jessica Jones as I often made it known, however, fans of the Comics got an idea of a few of their favorite comic characters made the live action transition for TV if not the MCU.  The showrunners were ambitious to a fault and there could’ve been a few adjustments needed but at the end of the day, it was Netflix’s call and they have decided to pull the plug.

Despite the not so good news, there is speculation that HULU might give cancelled series like Daredevil the revival treatment, while Marvel which is owned by Disney, may salvage other characters for their upcoming streaming service. Time will tell.

In the meantime, here’s a farewell message from Mr. Castle himself, Jon Bernthal: 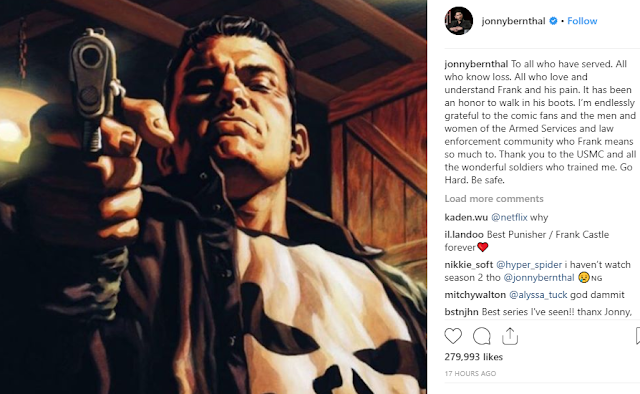