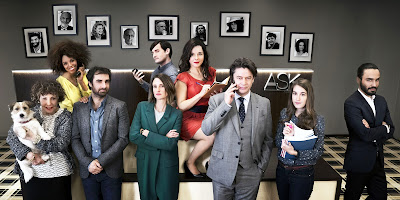 Dix Pour Cent a.k.a. Call My Agent or Ten Percent, is the show that hardly anyone watches, but is missing out on. It is a French TV show and it is shown on Netflix.
If one would ask me what kind of TV show Dix Pour Cent is, I would say it is kind of like Entourage, but way more sophisticated. Another difference is that Entourage was full of douchebag people. Only Mrs Gold, Sloan and Lloyd were likeable characters in Entourage. The whole main cast of Dix Pour Cent consists of likeable and real people and therein lies the charm of the show.

Dix Pour Cent tells the story of talent agency ASK in Paris. They represent movie and TV show actors. The fun thing about that show is that French actors and actresses play themselves and often they spoof themselves. Even funnier is that most of them are not known outside of France, but are probably all heavyweights in French cinema. Of course there are some famous actors and actresses in there. Persons like Jean Dujardin, Monica Belluci (not French but the French consider her one of their own), Isabelle Adjani, Isabelle Huppert, Juliette Binoche and Christopher Lambert.

The agents in Dix Pour Cent deal with the quirks of actors and actresses. This sets up a lot of subtle and hilarious comedy. They don't need to depend on poop or fart jokes and other smut to make this show funny. And that is real comedy to me. All the actors have great facial expressions in the most absurd of situations and it is never overdone. The dialogues are sharp and subtle. It seems like everyone on this show, is having a lot of fun!

There are already 3 seasons of Dix Pour Cent and each season is 6 episodes. Unlike certain Netflix shows this show could easily be 13 episodes per season and be absolutely fantastic! But I think it is the scheduling with famous French actors and actresses that only allows for 6 episodes.
Also, an advantage of Dix Pour Cent is that I discover new actors and actresses that make me want to check out their movies. Name one other TV show that does that!

The main characters of the TV show are fantastic. Thibault de Montalembert plays a very manipulative agent, who gets things done. Camille Cottin plays a stressed out agent, who aggressively gets things done. Not with violence, but just very determined.  Gregory Montel is the lovable loser. Lilian Rovere plays a very old agent who has some good tricks up her sleeve. You don't mess around with her. She also has a dog that is just fantastic. Fanny Sidney (funny name, LOL) plays a very adorable girl next door. Stefi Calma plays a woman who wants to be an actress, but is the secretary of the agency. She is one tough girl, because she has no problem throwing a chair if she gets insulted during a casting.

Nicolas Maury plays the funniest gay guy you will ever see. Laure Calamy might be the break-out star of this TV show. Her character seems like a total loony. She is very gossipy and she has the best facial expressions of all the actors. You can't help but laugh when she is on the screen. And last but not least is Assaad Bouab. That guy has been added as the eye candy for the ladies and is not just eye candy. The guy can act and he was in Braquo too. All in all it is a fantastic cast and you don't often get a TV show with such a large cast and without any unlikable character.

I can't wait for season 4. It cannot come fast enough. Putain!
Just do me a favor if you watch it, watch Dix Pour Cent in the French language with English subs, because that is the way it is meant to be seen.