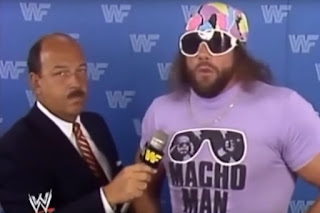 2019 is off to a very lousy start. Mean Gene Okerlund is no more.

If you don't know who Mean Gean Okerlund is let me enlighten you. Mean Gene is that mustached semi-bald man with the super recognizable voice, who interviewed all great pro wrestling legends you know. One could blindfold a wrestling fan and play Mean Gene's voice and everybody would know who it was.

When I started pro wrestling I watched an episode of Superstars Of Wrestling. Mean Gene was the brave man who had to interview the good, the bad, the ugly and the brute in the then WWF. Before I knew wrestling was fake I feared for the life of Mean Gene. One of the wrestlers could just snap like that and assault Mean Gene during in interview. The funny thing is, they never assaulted Mean Gene during his whole career. There is no pro wrestling without Mean Gene.

Just like the movie The Exterminator, had taught me the word motherfucker, Mean Gene taught me the expression "Give me a break". Often, that was directed at another legend in pro wrestling, namely Bobby"The Brain" Heenan. When Mean Gene interview Bobby Heenan it was always great. They had great chemistry with Mean Gene being the good guy and Bobby Heenan being the bad guy.

When people ask me what I like about wrestling the old school Mean Gene stuff is definitely there. Mean Gene was a big part of wrestling.

It was known that Mean Gene was a heavy drinker and could drink a lot of wrestlers under the table, however he was never drunk during interviews and he never looked like a drunk.

Mean Gene was also known for never breaking character during interviews. Well, Dr D David Schultz is the only one who succeeded in making Mean Gene break character. Breaking character only once in probably more than thirty years is professionalism at its best.

My favorite Mean Gene things were probably his interviews with Bobby Heenan, breaking character during the Dr D David Schultz interview, his facial expression of fear when certain wrestlers got louder and louder during interviews and his characteristic voice. Next to that the man was just entertaining.

R.I.P. Mean Gene Okerlund. The voice of wrestling and a person who must have put smiles on billions of people during his career.