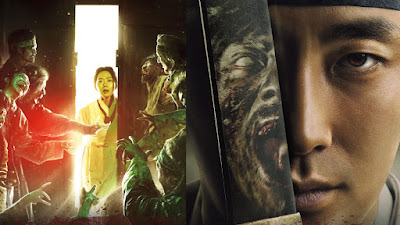 It seems that Netflix plans to capitalize off the Zombie craze or merely picking up the pieces that AMC's The Walking Dead has dropped. Not only has the venerable streaming network plans to produce and distribute as series based on Capcom's Resident Evil videogames but also Zac Snyder's upcoming Zombie thriller, Army of the Dead!

Prior to these projects being in the works, there's this new South Korean miniseries titled, Kingdom based on Kingdom of the Gods, which includes what else, Zombies!

Set within the medieval period of South Korea, this 6-part series centers around a power struggle within the royal Kingdom as the King of Joeson has fallen gravely ill as a means of a coup conducted by Lord Cho Hak-Ju. Despite being infected as a Zombie, the King is kept alive in the eyes of the public with the pretense that he's gone mad via illness and craves human flesh. 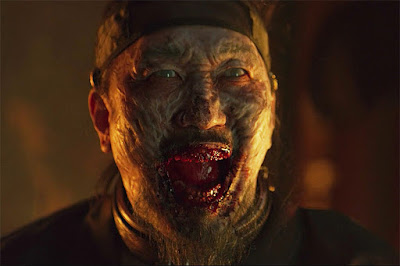 The sole purpose for not killing the king, is until the Cho's daughter, the Queen, gives birth to his rightful heir as a means of total control within the royal family. Meanwhile, Lee Chang, the Crown Prince, a bastard offspring, attempts to locate his father and unearth the conspiracy orchestrated by the Queen's unscrupulous father. But when an unknown agent, the same pathogen that infected the King, contaminates the populace of Dongnae, turns them into ravaging Zombies, resulting in all hell breaking loose! 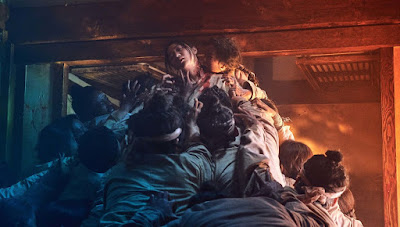 Kingdom in minor ways, is reminiscent of another Capcom game called Onimusha due to its period piece where the main character fights the undead via swordsmanship and combat acumen. But this series falls more in line with The Walking Dead however, the Zombies in Kingdom are more like "Running Dead"! Once infected, it takes a mere 20 seconds to transform and before it occurs, you'd best use that time gap as a headstart, as you're given the opportunity to either fight or flight!

What's damning about many of the characters in this series, are the poor decisions they make regarding disposing of the Dead. When the sun rises, the zombified horde succumb to a dead like state as in vampires and one would think that in order to contain the epidemic, the bodies should be burned or since the royal guard are equipped with swords, "off with their heads" but nooooo, idiots such as the Commander’s wife, consider it a crime to desecrate the bodies of the royal hierarchy.
Or the fact that a physician refused to warn the civilians of this increasing threat, via hubris as in, believing she can cure them. 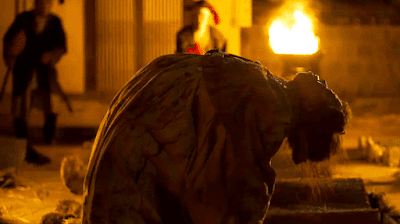 Although you have self-serving cowards like Magistrate Cho, comes off like Shaggy from Scooby Doo and just as incompetent. But at least there’s your stoic, heroic archetype and main protagonist, Lee Chang, that is one of the few brave, courage of conviction and other traits that makes of a hero. Chang has the common sense to at least attempt to contain the plague while being branded as a traitor by Cho and his co-conspirators. 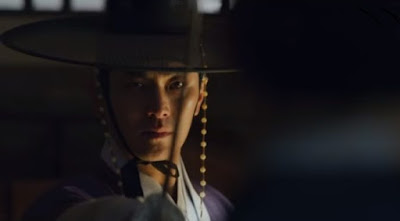 The political intrigue subplot can be compared to Game of Thrones, but it's serves the purpose for Kingdom's narrative. You get to find put who has noble or rather, not so noble ambitions especially the high-ranking officials as far as I'm concerned! There's one character who is partly responsible for the outbreak despite his "noble" intentions and his actions, were unquestionably shocking! 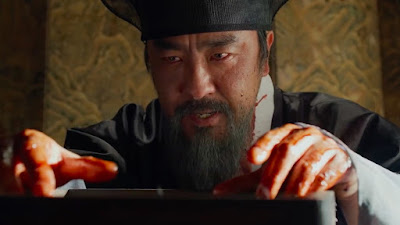 I'll just say this, for those who are unfamiliar with horror tropes, get those barf bags ready! There are moments where the most hopeless of situations can bring out the best in people, or at least some as you shall see throughout the series. Despite a slow burn start during the first two episodes, Kingdom will take you on a wild ride once it surpasses the speed bump. You'll witness plenty of dire consequences, heroism and political accountability! So far, this is the best new Netflix series of 2019!
If the streaming platform can continue to produce high quality series and films such as Kingdom, I’m getting my subscription money's worth! Can’t wait for season two. 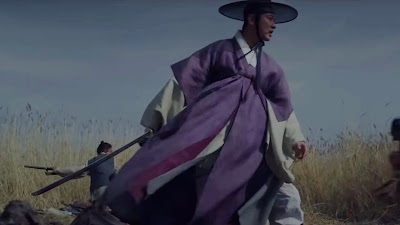