Attack on the 80's: The Predator

If someone were to ask me why I have such a fondness for the 80's, my answer would be how it was the decade of nuanced pop culture. You had amazing concepts that came from the era of big hair, neon clothing and jingoism. Primary examples in film, toys, television were Robocop, Escape from New York, Transformers, G.I. Joe, Miami Vice, Watchmen, Nintendo NES, Sega Genesis and this little unknown movie starring Arnold Schwarzenegger titled The Predator!

The premise for this 1987 science fiction classic was unique in many ways, because it wasn’t about some creature from another world out to invade earth, but instead, this galactic trophy hunter saw Man as his prey! The first arc of the narrative was akin to a Rambo action film only to morph into something more frightening. Underneath its action-packed surface, was a niche survival horror tale as we get to see this paramilitary rescue team get picked off one by one, until there's only one Man left standing and we all know who that was! 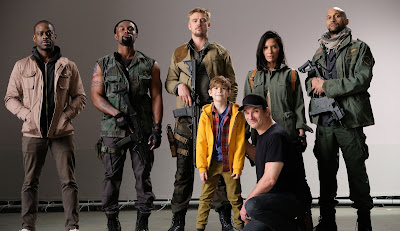 Anyway, fast forward to 30+ years later, and behold, a Predator reboot directed by Shane Black who starred in the first Predator film, which includes a who’s who of "thespians" from Comicbook movies!Some were seen in very good films, like Logan and Black Panther while others like say 2004's Punisher and X-Men Apocalypse were dumpster fires! Then you have unfunny comedians like Michael Keegan and um, "Shane Black" who responsible for the sophomoric dialogue but I digress.

The film opens with our protagonist Army Sniper Quinn Mackenna, (Boyd Holbrook) witnessing a spaceship crash while going on an hostage rescue mission, (Sound familiar?)  who retrieves some "souvenirs” from an incapacitated Predator.

Our hero McKenna is now taken in for observation as well as the Alien creature, who awakens, brutally slaughters the lab personnel yet, spares Science officer, Dr. Casey Brackett (Olivia Munn) I guess Preddy liked what he saw being as how Munn was undressed within a stall to prove that she is defenseless and how would she know that he wouldn't kill her regardless?

Quinn is bused along with a few military vets who have PTSD but run afoul in the escapee Predator as if that wasn't bad enough, a much bigger and badder Predator has all of them in his sights! Between the Predators, a morally bankrupt Government researcher Will Traeger and the kooky quartet of Veterans, McKenna finds himself between a rock and a hard place! 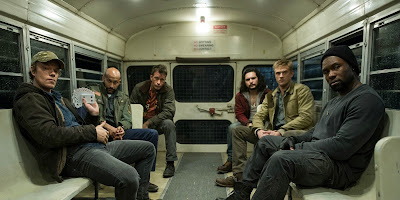 Sigh, as you can tell, its already off to a bad start due to its predictability, dumbed down dialogue, repetitive soundtrack and not to mention the all too familiar trope, where some guy finds alien weapon or artifact and uses it for "goodwill".

As for the cast, for starters, Sterling K Brown's Traeger, is your atypical mad scientist who carries an obsession for the infamous alien species with hopes of furthering his research without any true purpose, other than harnessing their capabilities and technology for weaponization.

Will is heard dropping so many F bombs, throughout the movie that’ll have Samuel L Jackson saying, "shut yo mouth"! (I'm talking about Shaft, well he can't dig it".) Sterling is a decent actor, but he lacks charisma compared to his previous roles which includes a brief part in Black Panther. It seems as if he's basically phoning it in, stateside! And to think, that his acting career was off to a good start beginning with that NBC series costarring that morbidly obese woman.

Once again, it's seems as if Oliva Munn in yet another franchise killer from Fox.  She performs what is seen as a nude scene, but on the contrary, it’s not a nude scene! However, as a conciliation for you Munn fans out there, at least you get to hear her say "Eat my Pussy". I swear, her acting in this sequoot sounds reminiscent of her bad skits from G4's Attack of the show!

It seems as if when Shane isn’t writing any funny scenes, you can’t help but laugh at the unintentionally funny moments like Predator holding a kid as hostage or Mackenna and his "band of bros" surfing an escaping spacecraft leading to him performing a bungee jump while said craft splashes down.If there's one good thing I can say about the Predator, is that lil revelation of why the Alien hunters happen to land on Earth of all planets, and reason being is that it has something to do with topical subjects like say, climate change. 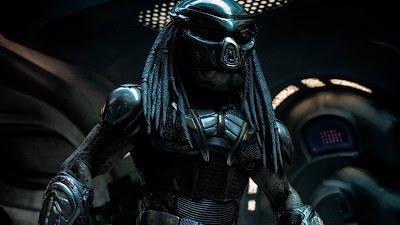 Unfortunately, that’s just not good enough to recommend this clusterfuckup as The Predator is a complete mess!Unlike it's 80's counterpart, its devoid of any nuance and substance, but instead Mr. Black has regurgitated his past material from Lethal Weapon, Kiss Kiss Bang Bang and to a lesser extent, Iron Man 3, but in the case of Predator, both direction and script were dead on arrival!

At least Paul WS Anderson made more of an effort regarding the disappointing Aliens Vs Predator.  And that’s saying plenty!

NOTE: If there are any grammatical errors or signs of pure laziness while writing this article, it’s because, like Shane Black and Fred Dekker, I didn’t care to put much effort in this particular review!
#Sorry, not sorry