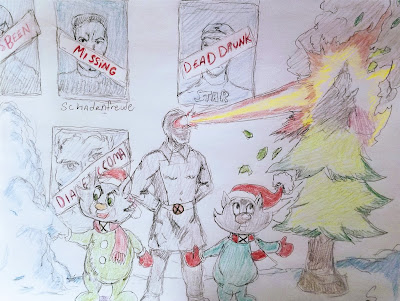 Sky: Well, brother after the last Christmas episode, here we are again with a new one, three years later! Ah, the spirit of Christmas, where everyone is merry and afterwards, back to being the miserable sods they are!

Where the rate of suicides is up, where the less fortunate cannot spend presents on loved ones because "rent is too damn high" and let's not forget that time of the year, where people await some Man to come down from the sky to shower them with gifts while the other guy is Santa Claus! 😺

Ollie: Tell me about it Sky, many things have changed since then, we have an unhinged president, escalating Culture Wars, manufactured outrage has become more of a selective witchunt and not one, but three Websites have bitten the dust and all this was within a year ago!!

Sky: But, we're still here unlike Supernaughts or Pop Axis, not to mention Bop and a few guest contributors! The way I see it, Poptic Nerve is the last man standing.

Ollie:  Yeah, yeah "Happy Anniversary". So, whatever happened to our British bud?

Sky: You mean Rose, she's probably off to her parents for Christmas.

Ollie: How cute, Happy X-Mas Rosie! Actually, I’m talking about Stu.
After The Man Who Saved Movies imploded, he disappeared altogether.
Maybe he took a job in acting since most of you brits are stealing thespian gigs from the yanks!

Sky: Oh, there you go again with that shite. He appeared at the Norwegian's site and boasted how he "kicked" Stalk 's ass in INJUSTICE 2.Well, here's the actual footage!

Ollie:  Buahahah! He was a cool bloke, but no match for Stalks when it comes to fighting games, a better writter perhaps, but he can't hold it down in the ring! That being said, I gotta love his reaction once he found out who Assimovlives was. Say, I hear Talkbacker is up now, did you get an invite?

Sky: *Ahem* So, Ollie, heard any good Christmas songs lately?
Cause Baby, it's cold outside!

Ollie: Oh, that..! Who would've thought that a Holiday tune about romantic flirtation might be mistaken for a Date rape song? Are the MeToo broads at it again?

Sky: I can’t say Ols, however, you readers out there can judge for yourselves! Roll em!

Ollie: Haha I saw what you did there!
And now that I have listened closely to the lyrics, it sounds kinda rapey, when you look at those two idiots. What the fuck is this world coming to?

Sky: Yeah, just ask Nick Cannon about how Kevin Hart got called out for his insensitive comments, yet three so called "Comediennes" tweeted even more offensive shit and got a pass. "Oy Vey"! Ok, we're way off track here. Time to digress and discuss Christmas songs.
Here is our list of tunes that spread both joy and cheer to the entitled masses!
"I'm screaming cause some mod banned me, he said my posts have gone too far.."

"All I want for Christmas is nudes" *Giggle!*

Ollie: I presume, that last one was from or for Bop, amirite? I have a few Christmas songs to recommend:

"Give it to me baby"

"Keep it coming on"

"Can you feel it"

Sky: ?!!? Those are not Christmas songs!! They were songs used for marketing in commercials for Amazon, Walmart, etc!!!

Ollie: Well, Christmas is commercialized.
Off topic, our producer and the "Man Who Slayed Movies", Stalks was supposed to develop a video version of this Christmas special but refused on account that he was "too busy" so, I snooped in on him and look what I found?

Sky: Buahahahah! Well, he did leave this for us at least!

Stalkeye: Well, Christmas is approaching and now that 2018 is winding down, i'm making a list and there isn’t no need to check it twice because these movies are not nice! Here are my picks for the worst  flicks of 2018! No "Pwesants" for you in your stocking this X-mas this time!

Now this fucking movie here, isn't even worth a reboot let alone a revisit especially after it was poorly written and directed by screen writer and creator of Lethal Weapon Shane black the Predator is filled with sophomoric humor and silly action sequences that make Michael Bay's Transformer but white Empire Strikes Back in comparison this movie was a waste of my precious 2 hours and the long with Iron Man 3 is the final nail in the coffin of Shane Black's career I am officially done with anything else he may be involved with in the future!

Oh, great another wanna be hitman or rather hitwoman action thriller along the lines of atomic blonde and just as bad as 'Blonde.Mary feeling this crisis of conscience, takes in some kid who happens to be an intended target.Of course, she goes after the organization in your typical generic fashion. Yawn!

Travolta hit it big with Saturday Night Fever and after a long hiatus, made a comeback in Pulp Fiction, well, fast forward to flops after flops and yet another one to add to his losing streak of shitty movies.

Gotti based on the notorious Mobster of the Gambino crime family, is not a slow burn but a slow drag. John is obviously phoning in his performance that is flat, tepid and unconvincing. Even during his final scenes with Gotti succumbing to cancer, there's hardly any emotional depth. This biopic might as well be made by Troma films!

Dane Cook, Pauly Shore, step the fuck aside! You have taken a backseat to the new most hated comedian, that is Amy Schumer!I Feel Pretty features a pudgy, unattractive Woman (Schumer of course.) under circumstances is "hypnotized" into thinking she's some hot babe!
The humor found in 'Pretty coupled with the ham-fisted message of 'acceptance' further weighs this movie down into the abyss of comedy sewage. Amy would've been better off stealing funny material from other movies, since the cow stole jokes from other comedians!

And to think she was considered for the role of Barbie?? Bitch, go be dead!

Regardless of how much I like AMC's History of Horror, I didn't really care for its host-Eli Roth. He's proven himself a hack ever since fucking Cabin Fever and still, with the unintentionally laughfest that was Death Wish! No, not the classic influential Michael Winner vigilante film, but "behold" a remake!!

Bruce Willis plays well you know, "Paul Kersey" who goes on a revenge spree after his wife gets killed. (But at least his daughter is spared, compared to what occurred in the OG Death Wish.) The remake is silly, contrived and very lackadaisical when it comes to any creative input or direction. However, I did enjoy the Ice Cream Man scene, other than that, I'm certain that Winner and Bronson are spinning in their graves at this shit!

Oh, Sony. If you're not producing great Playstation exclusive games like God of War, Lost Horizon or Spider-Man, you're fucking up Spider-Man-as in the movie franchise! 2018's Venom, started off promising but during the second half spirals into a vacuum full of dull cliches, unimpressive CGI and questionable scenarios.

For instance, Eddie Brock's ex girlfriend wants nothing to do with him, yet goes out her way to help him knowing that he carries a carnivorous Alien symbiote, suggests that they go to the Hospital to get it looked at!Then of course there's the twisted mad scientist, Carlton Drake who wants to harness the symboites for the betterment of mankind.The post credits were used for hinting a possible sequel, but it won't convince me to watch the next Venom film.
It's only saving grace, is Tom Hardy's role as Investigative reporter Eddie Brock along with a few funny quips from the infamous Symbiote, Venom. Guily pleasure at best, a lump of coal at worse.

Ollie: Okay, but did he at least give a list of his favorite Christmas Movies, TV episodes or whatever since this IS a Christmas segment?

Sky: As a matter of fact:

"Christmas with the Joker" Batman The Animated Series

"Merry Christmas" (I don't want to fight tonight.) The Ramones

Ollie: Oh, okies! He purposely left out one song on purpose but that will be used for the outro...that's if his lazy ass gets around to it.

Sky: Ollie, any Christmas wishes you would like to offer our readers?

Ollie: Other than one wish coming true last year, *AHEM* I would wish everyone to stay away from the toxic sewage that is Social Media. At least until the New Year's then pseudo justice warriors, feminots, narcissists and butthurt bigots can get back to business, which is blowing hot air just in time, cause "baby, it's cold outside"!

Sky: "Too soon"?  Anyway, give the gift of life to hundreds of us cuddly animals that need food and shelter by donating to your local Animal shelter or The Humane Society. Merry Christmas everyone!