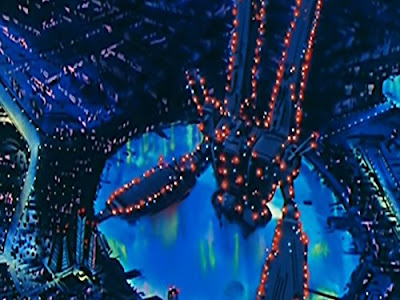 Christmas, a time of ye faithful with comfort and joy". But what happens when your foundation of optimism and faith is suddenly broken and begins to crumble?

In the penultimate episode of Robotech: The Macross Saga, "Seasons Greetings" gives the answer!

Originally broadcast here within the United States circa 1985, Robotech was a syndicated anime Space Operatic series that is comprised of three different shows under the umbrella of animation giant, Tatsunoko Productions. Macross, Southern Cross and Genesis Climber Mospeada were re-titled for the American demographic as in The Macross Saga, The Robotech Masters and finally The Next Generation. Each "chapter" displayed   themes not shown in syndicated animated series during that era. (Be it war, romance, pathos or heroic sacrifice)
.

And truth be told, Robotech one of the best English dubbed Anime series that in my opinion, surpasses it's Japanese counterpart in story, soundtrack and substance.
That's right you purists, I said it!

Episode 35 is a continuation of the previous events from eps 32-34. (Video is right below!↓)

After a previous battle that left the remaining Zentari invaders (led by Kyhron) secluded within an South American amazon jungle. Battered, broken and depleted of Protoculture, the alien extremists plan to head toward the industrial sector of Macross and steal as much Protoculture in order to repair their damaged battlecruiser.

Lin Mimei feeling abandoned and lonely enters Rick Hunter's apartment complex to seek comfort and solace after the departure of Kyle. Lisa Hayes, en route to Rick's apartment to express her feelings toward him, despite being stood up, (See "Private Time".) unfortunately finds his door left ajar and sees both Rick and Minmei together.

Heartbroken and in a funk, Lisa heads to a nearby bar to down her sorrows to which in a drunken stupor, sarcastically sings "Stage Fright". (Minmei's well known song aside from her battle hymn-"We will win".)

Sometime later Khyron's army attacks the industrial complex, the Robotech Defense Force scrambles a bunch of Veritech fighters toward the sector, however, one of their best pilots, Rick Hunter is unavailable thanks to a bitter Captain Hayes excusing him as "having a cold" .

As a means of escape, the Zentradi with the aid of a suicide bomber dressed as Santa Claus, detonates a ring of explosives around the city serving as both a distraction and sending a very cryptic message. As the human casualties began to pile at enormous levels, the people of sector one are no longer thinking of Christmas, but instead thankful to be alive.

Rick, Max and Maria along with the few remaining pilots, manage to put out the smoldering flames, then attempt to reunite families who were separated from the brutal terrorist attack on New Macross City.

"Attention Micronians, this is Khyron the Destroyer. I want to wish all the people of Earth a merry Christmas, and I send you a special greeting from Santa Claus. May all your foolish holidays be as bright as this one.”

Rick discovers Lisa's white lie and immediately confronts her and somewhat holds her responsible for the catastrophic outcome for had he been on duty, most of the devastation would've been avoided.
Rick is an ace fighter pilot after all. While returning to his apartment, Rick is gleefully surprised once he sees an arranged Christmas dinner and cake all courtesy of his house guest, Lin Mimei!
She wishes him a Merry Christmas as the two begin to kiss.

Footnote: It's episodes like "Season's Greetings" that further gave credence to the Robotech series.
Especially during a time when most syndicated animation-based programs had to adhere to the FCC's standards and practices policy-be it removal of violent content and adult themes, Robotech bucked the trend when featuring casualties of war and unrest during what was supposed to be a very happy and peaceful time.

Despite the horrific attacks that resulted in the loss of many lives within the populace of New Macross City, the surviving civilians demonstrated an unyielding spirit because at the end of the day, they were just happy to be alive. Let that sink in!

Coincidentally speaking, Seasons Greetings mirrors what happened a few years back during the cowardly terrorist attack around Christmas, in Berlin. When you have a society that becomes resilient after experiencing horrific setbacks, and refuse to let terrorism win, that speaks volumes!

In a perfect world, one should be able to celebrate a joyous holiday without care or concern of hatred, fear, war and poverty. It's a slow climb, but perhaps someday, we’ll achieve Peace on Earth. 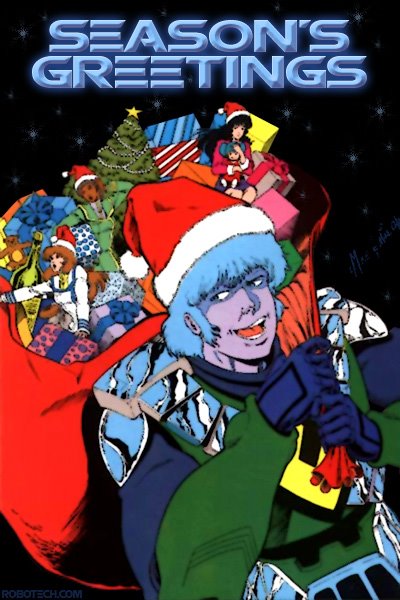