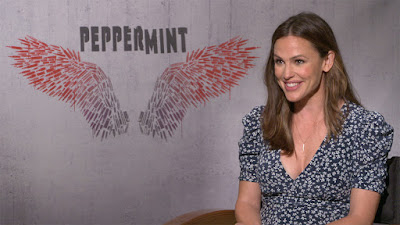 What do Michelle Yeoh, Angela Mao, Shannon Lee, Cynthia Rothrock, Diana Rigg, Honor Blackman, Lucy Lawless, Jennifer Garner and Sarah Michelle Gellar have in common?
They starred in movies or tv shows as women kicking ass. Granted, some like Michelle Yeoh, Angela Mao, Shannon and Cynthia Rothrock did it better than the rest. Others like Diana Rigg and Honor Blackman were iconic. And there is the rest who kicked ass but at a lower level. And then there were women, who didn't kick ass but were badass like Pam Grier and Tamara Dobson who were badass women.

Jennifer Garner shot to fame with Alias. It was a show I never liked, and I was not a fan of Garner. At that time there were rumors she was a martial artist before she started with Alias, so that at least made her legit. I always wondered, if she were really a martial artist what she could do if guided by some good fight choreographers. You see, apart from Cynthia Rothrock there was never an American woman who could do some good-looking martial arts in a movie. And shut the fuck up about Ronda Rousey. And don't get me started on Gal Gadot.

When Jennifer Garner got to do Elektra I thought she might do a good job, but we all know how that turned out. She is not to blame for it, though. In a way Jennifer Garner was a bit tragic, because she seemed to have skills, but she could never show them off. And, she did seem more sympathetic than most Hollywood actresses. She was tragic in a kind of way. More legit than most actresses, but not as popular. And this brings me to Peppermint.

First of all, Stalks, thanks for your review otherwise I wouldn't even have checked this out.

Second of all, I also like vigilante movies. I live for action movies and vigilante movies are definitely a part of them. MY most favorite ones are probably The Exterminator and Vigilante also known as Street Fighters. i am sure I have seen many more through the years, but those come to mind the fastest.

So Peppermint.. What can I say?

What I really hate in movies is women with short hair. That makes them a-feminine. Hollywood seems to like portraying women like that a lot. Jennifer Garner looked like a man in the beginning of the movie and I thought:"Here we go again. A girl power movie with a short-haired woman. *SIGH*"

Fortunately, that changed in the movie so that was a plus. They didn't make her the typical Hollywood "girl power" woman. You know, the woman who gets a stand-in for all the fighting scenes, has 100 close-ups per second in action scenes and is the woman who makes the most eye-cringing ultra-feminist man-hating remarks. There was nothing of that in this movie and that was another plus. What I saw was a movie that needed about 20 minutes to start and then it had a great pace with lots of action. It was not complicated action, but realistic in a kind of way that Garner had brass knuckles, guns and knives to get even. That made it a bit more realistic.

Would I recommend the movie? If you are a Jennifer Garner fan, yes. If you like action movies, yes. If you just want to have about 90 minutes of entertainment that doesn't insult your intelligence, yes. This movie was a step in the good direction and I hope Garner gets to do more action roles in the future. I will be paying more attention to her now, because she can still fulfill her potential of being a better than average female action star. All it takes is a good fight choreographer to make her really shine.