Coulda been a contender: Most disappointing films and Television of 2017! 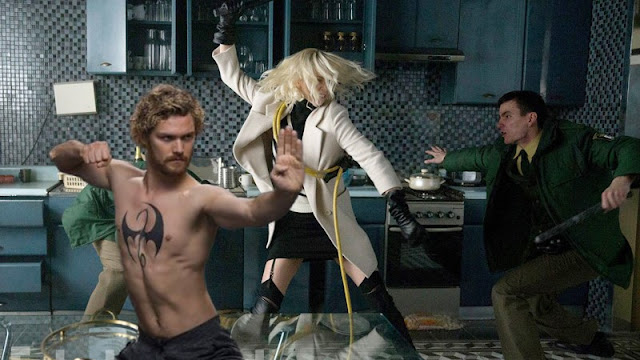 So,  now that 2017 is officially over and done with and now that I have listed the best Films, Tv and what have ye of said year, now here's the flipside. Unlike many "Worst of" lists, I will go a bit easy on these poop culture picks. Most are not necessarily bad per se, just that they had potential for pure greatness.

Ergo, they "could've been a contender "!

Here are the picks of 2017 biggest disappointments of this year.

What started as a cool premise-a female secret agent during a cold war during the 80's, turns into a weak tour-de-force with dull pacing and a shoehorned 80's soundtrack!
While some compared AB to a female John Wick, the hyperbole of Charlize Theoron as this "badass" Action Heroine lacks the punch in comparison to Keanu Reeves' franchise let alone classic celluloid sirens i.e. Pam Grier, Sigorney Weaver, Linda Hamilton, etc. The only redeeming thing about 'Blonde, is the one take stairwell fight scene. (If you're thinking about the lesbo scene, GET YER MIND OUTTA THE GUTTER!)

And speaking of hyperbole, Christopher Nolan's Dunkirk, is a slow burn exercise of a War movie.
The after 60 minutes in, I found the pacing very dull despite impressive cinematography. Throughout the movie, there was too much ducking and not enough shooting.
No real tension despite Hans Zimmer’s dramatic orchestral cues in which our evacuees were faced with dire situations. Yawn!

I couldn’t feel a sense of dread when the British Compared to other WW2 epics like Gallipoli or Saving Private Ryan, Dunkirk falls flat. In hindsight, methinks I rather spend my free time playing Call Of Duty WW2 instead for a fun World War 2 experience.

However, I thought the mysterious fighter pilot-Farrier, was one of the rare shining moments from Dunkirk.The reveal of the pilot, may or may not surprise you.
Harry Stiles' performance was legit from what little I have seen from him. Also omitting his song "Sign of the Times" for the end credits is a lame creative decision. Dunkirk was too vanilla for my tastes.Instead of Dunkirk, I would go for a much better  real life inspired WW 2 film called, Battle for Sevastopol!

It’s the superhero ensemble film most have been waiting for but didn't deserve. Justice League- the spiritual sequel to Batman Vs Superman: Dawn of Justice, is an example of how last-minute production changes can screw up a project. Zac Snyder who originally helmed JL had to opt out during filming due to an unexpected family tragedy.

Enter Josh Wheldon from the Avengers movies to fill the directorial shoes of Mr. Snyder and as a result, the movie suffers from a bit if Schizophrenia, half dark and half lighter toned. Aside from the directional shift other controversies that plagued this movie was Henry Cavil's CGI Stache coverup, a lame ass villain, uninspired dialogue and to tip it all off, unexplained scenes that focused on one family in Russia when the world was faced with imminent danger.

Justice League had a rushed feel to it but its not that bad a film, just should have spent more time in development cycle.

Star Wars: The Last Jedi (Judging from the first 40 mins, it's a serious letdown)

Here are a few other dishonorable mentions:

Resident Evil: The Final Chapter (Then again, it comes as of so surprise that this last sequel of Paul WS Anderson’s magnum opus, under performed. I’m just glad that it’s over and here’s hoping for a much better reboot)

Alien Covenant (Clichéd, contrived and confusing at times yet more entertaining than Prometheus.)

Ghost In the Shell (This and Death Note might be the death knell of Anime adaptations.)

Ok, this one is an extra category of its own. And it falls within the worst film of 2017! Remember when I mentioned that I was going to be easy on my picks of disappointing films? "I lied"!!

The Mountain between us is not only boring, unintentional comedy, but it's full of silly tropes.

The premise of this Rom-Dram, is two strangers board a noncommercial flight to wherever, but suddenly the pilot catches a heart attack thus crashing the plane into the snowy mountains and it's up to the couple and the pilot's doggie to fend for themselves while developing a bond so tight they...
..ah, fuck this wannabe Hallmark presentation!

Idris my brother, you bitched about starring in a Marvel film, yet you put out shit like this, the Dark Tower and now Gurella ? In the words of Sho Nuff-"

After the excellent Ultimate Marvel Vs Capcom 3 game, I rejoiced after learning that game developer Capcom were working on a sequel to their Versus series.

Now that it has finally arrived, I am not too impressed. For starters, the weak storymode, served no purpose to playthrough aside from unlocking a bonus stage. The graphics although containing more of a 3D aesthetic, was a bit dull compared to 2012's Ultimate Marvel Vs Capcom 3.

The developers of this game made the combos easier for noobs via pushing one fucking button and the super moves are recycled from the last games. Talk about consistency!

I'm bothered by the lack of more characters and by that, I don't mean the X-Men franchise since Disney and Marvel had taken umbrage with the film's distributor, FOX until they of course, bought the company.

However, in the meantime, Capcom had plenty of other characters to choose for their Marvel roster, instead, we have Black Panther, Winter Soldier, Black Widow, Sigma and Venom as DLC?!?
Way to nickel and dime your loyal customers, Capcom! Fuck you!

With that being said, it’s a ok beat em up. At a discounted price, which I paid for.

What started off promising during the season 6 finale and on to the premier episode of the seventh season, this once critical darling of AMC has jumped the Shark, or rather “bit the bat" as in Lucille.

Season 8's episodes were full of filler material, empty rallying speeches and uninspired gunfights that were unintentional callbacks to the A-Team!

Jeffrey Dean Morgan is very charismatic as main baddie Neegan, but despite his character's level of ruthlessness with a slick, leanback, Neegan lacks the creepy factor of the Governor.

Jack King Kirby is spinning in his grave. Not only flipping on his stomach so Marvel can kiss his ass for screwing him over, but for ruining yet another creation of his.

Marvel' Inhumans is basically Disney's poor attempt at establishing a "X-Men" franchise that began during the lackluster Agents of Shield. 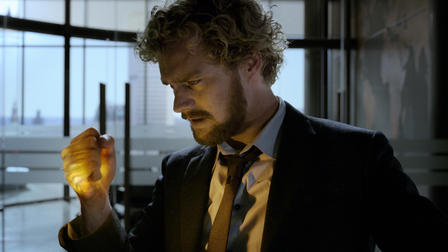 I was a huge fan of the Iron Fist comics since the classic Clairemont/Byrne run from the 70's and now that I have watched all episodes of the highly anticipated series based on this kick ass character, to say how disappointed I was, is an understatement!

This semi factual series is based on real life Black Power militia movement during the early seventies racial era in England.

The British Black Panther party is determined to shake things up after the mistreatment and oppression of Black immigrants. While the premise sounds very exciting if not promising, the execution falters a bit.

My biggest complaint about Guerrilla, is how the female party anarchist is portrayed as Asian-Indian while the six part series overlooking the Black female radicals who in reality, played a deeper role in the struggle for social justice while battling oppression.

Idris Elba makes a few appearances throughout the series; however, they could have done so much more with his character. Overall, Guerilla makes for a decent history lesson, despite certain parts of the narrative having a scintilla of "revisionist history".

This season was a bit too melancholic compared to the previous offerings.   A major supporting character bites the dust and prior to that, there are constant flashbacks and flash forwards that served as pieces for this season's puzzle. And to complicate things further, the producers threw in a noir plot device that lead to nowhere at the end of this season.

However, there is a story arc that takes a different turn for both Ray and his unscrupulous father, Mickey.
Loyalty and faith are put to the test whether it’s Ray’s siblings, his kids, business associates and his self-esteem.  There was not enough emphasis on survivor's remorse and a few episodes contained both bad titles and very bad songs! (See: Shirley Duvall and Horses)

2017 has its share of great mediums from pop culture, but of course there are the underperforming examples.

What’s your biggest disappointment s? Drop em in the comments section below!